Instead of our usual article we thought you might be interested in a bit of an insight into what makes us tick. We felt that explaining the SCC&D logo, how it came about and what it means might be a good place to start.

Southern Cross Coaching & Development’s logo is more than just a random logo. It’s got a bit of a story behind it and plenty of symbolism relating to our field of professional and personal development, which we hope you’ll find interesting.

The Background Story of the Logo
Southern Cross Coaching & Development’s logo was originally put together in 2006 by Southern Cross Coaching & Development’s Founder and CEO, Simon Smith, when the company first started and was just him and a blank laptop working from home after he was unexpectedly retrenched. Simon designed the original logo (see image) in PowerPoint as he couldn’t afford a designer when he started!

Why the Southern Cross?
After Simon finished 10 years as an officer in the British Royal Air Force, he travelled through Asia for 6 months then around Australia for a year in a beat-up old graffiti covered van in 1995-6. During that time he visited the Observatory at Canberra and just happened to view the Southern Cross through the telescope on one of the tours.

This had quite an impact at the time (see below for explanation of the Southern Cross), although little did he know that what he saw was to become the symbol for his future coaching and training business which was barely a twinkle in his eye back then.
A few months later, during his 2 years living and working in Borneo and the Philippines as an underwater videographer, SCUBA diving instructor and marine researcher, Simon spent a couple of months crewing a 37-foot yacht around the South China Sea. He regularly took the helm on the midnight to 4am shift, enjoying the solitude and the jet black night sky set ablaze with the sparkle of billions of stars (and often with whales and dolphins frolicking around the boat leaving ‘starlight’ trails of bioluminescence in the water – but that’s another story…).

Most nights he would sit and watch the Southern Cross, spiraling on its rising and setting journey in the South. It became a symbol of direction, freedom and inspiration, provoking many hours of professional and personal reflection, deep thinking and philosophising…and also that it was soon time to get some kip!

Fast forward 10 years to 2006 when Simon was setting up his own company. Simon’s observations during his travels on the yacht and in Canberra, and the associated symbolism, meant that Southern Cross Coaching & Development was the natural choice for the company name and the Southern Cross itself was perfect for the logo.

The Pointers
The two lone stars pointing to the Southern Cross are called “The Pointers” and are symbolic of Coaching and Training focusing on the individual/ team/ organisation and of pointing you in the right direction.

To the naked eye looking at the Southern Cross in the night sky, the ‘fifth’ star, just below the far right hand star of the cross, appears to be just one white star. However, not many people know that when viewed through a telescope it’s actually a cluster of several bright, multi-coloured stars known as “The Jewel Box” – as depicted in the logo (which is what Simon saw on his visit to the Canberra Observatory).

The analogy here is that our Coaching, Training and other services are the telescopes that help you see the ‘jewels’ inside, helps you gain insight and awareness into you, your leadership, your career, your team, your organisation, etc.

Coaching, and knowledge in general, develops and changes your perspective, it helps you see new directions and ideas, and helps you view you, your development, your organisation, your leadership, your career and other people in a new wisdom and in a more knowledgeable light.

Another part of the Southern Cross is called The Coal Sack. Just below The Jewel Box is an almost completely black patch of sky called The Coal Sack, barely discernible unless you’re away from the city lights. This also has great significance in Aboriginal culture – see below.

It’s actually a dark interstellar dust cloud obscuring the light of the stars behind and so appears as a dark nebula. The analogy here is that in all of us there is also a dark patch that we can sometimes drift into – coaching, training and knowledge development can help prevent this, and also get you out of it when you are in it. We know – we’ve been there!
The blue/black background and the rays of light on the logo (emanating from The Jewel Box) are analogous of the dawn. In a coaching and development context, this is the emergence and brightening of awareness and insight, the development of wisdom, the burst of knowledge, inspiration, ideas and direction and the materialisation and initiation into action, all of which Southern Cross Coaching & Development focuses our services on.

I bet next time you look up into the sky at the Southern Cross you’ll see it from a completely different perspective with this new knowledge! That’s what Southern Cross Coaching & Development can do for people when they work with us to look at their businesses, their careers, their leadership, and their lives. 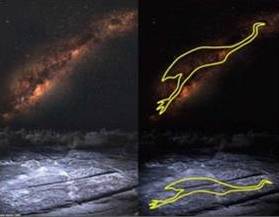 From our research, we’ve discovered that the Western cultures named ‘Coal Sack’ is in its own right very important in several Aboriginal cultures. The Coal Sack forms the head of the Emu in the sky. The “Emu in the Sky” is a ‘constellation’ that is defined by dark nebulae (opaque clouds of dust and gas in outer space) that are visible against the milky way background, rather than by stars – the body and legs are other dark clouds trailing out along the Milky Way to Scorpius.

Just North of Sydney, in the Kuringai National Park, there are extensive rock engravings of the Guringai people who live there, including representations of the creator-hero Daramulan and his emu-wife.

An engraving at Elvina Track shows an emu in the same pose and orientation as the Emu in the Sky constellation. On autumn evenings, the emu in the sky stands directly over her portrait; just at the moment when it’s time to gather emu eggs.
Amongst the Wardaman people, it is said to be the head and shoulders of a law-man watching the people to ensure they don’t break traditional law. According to a legend reported by W.E. Harney, this being was called Utdjungon, and only adherence to the tribal law by surviving tribe members could prevent him from destroying the world.
The fact that most Australians today can hardly see the Coal Sack due to light pollution whereas prior to Western settlement of Australia it was a defining visible feature, along with other similar elements, is in itself food for thought.